Speaking and listening may not be formally assessed in primary schools, but they’re vital skills for every child. Here’s why – and how to encourage oracy.

We’re all keen for our children to build their literacy skills at school, and become confident readers and fluent writers. But developing a mastery of English isn’t just about reading and writing: it’s also about becoming a good speaker. Oracy is the ability to express yourself clearly and communicate with others effectively through spoken language.

‘It’s about having the vocabulary to say what you want to say, and the ability to structure your thoughts so that they make sense to others.'

A key part of oracy is for children to think carefully about the language they’re using, and tailor it to their subject, purpose and audience. For example, a Year 6 pupil should understand that they need to use simpler words and sentence structures when explaining the rules of a game to a Reception child than they would if they were with their peers.

Oracy isn’t, however, just about being a good talker – or talking lots. It also includes listening to others, and responding appropriately.

So much in life depends on being a good communicator, so it’s vital that children learn the importance of oracy from a young age.

‘Good communication and language skills support children’s ability to learn, think about and understand the world, and interact with others.'

Indeed, children who start school with limited communication skills are six times less likely than their peers to reach the expected standards in English at the end of Year 6.

Good oracy also leads to improved performance in other curriculum areas, including maths and science.

Developing early oracy skills isn’t just important for children’s education, though. Children who communicate well are more likely to form good relationships with other children and adults, and may be less prone to behaviour sanctions as they can express their frustrations verbally rather than lashing out or losing their temper.

Children who are good communicators are less likely to have mental health problems as adults, possibly because they’re more able to express their feelings.

Oracy and speaking and listening skills in the National Curriculum

Oracy may not be officially assessed by SATs, but it’s an important part of the National Curriculum, and not just in English.

‘Spoken language is a requirement across the curriculum because it helps students to express and explore ideas before they commit them to paper, supporting the development of reading and writing.'

‘More than this, talking through an idea, problem or finding enables pupils to share their thinking and learn from each other.’

The National Curriculum says that having ‘a strong command of the spoken and written word’ is one of its overarching aims. In particular, it says children should:

It sets specific speaking and listening objectives within the English programme of study for each year, and oracy is also developed through other curriculum areas, such as drama.

Oracy in the classroom

The deliberate, explicit and systematic teaching of oracy across phases and throughout the curriculum will support children and young people to make progress in the four strands of oracy outlined in the Oracy Framework below. 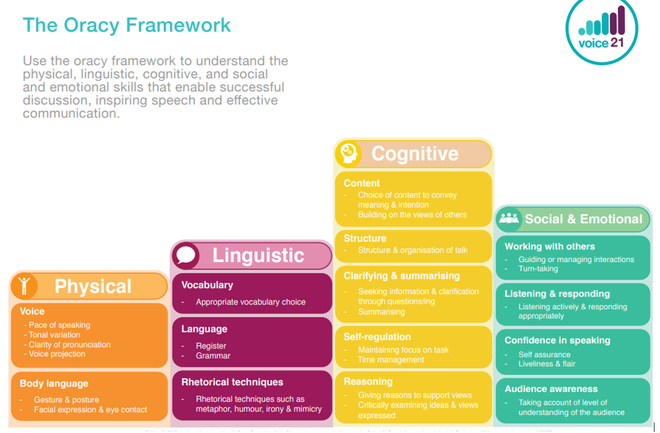 Here is a child-friendly version of the framework: 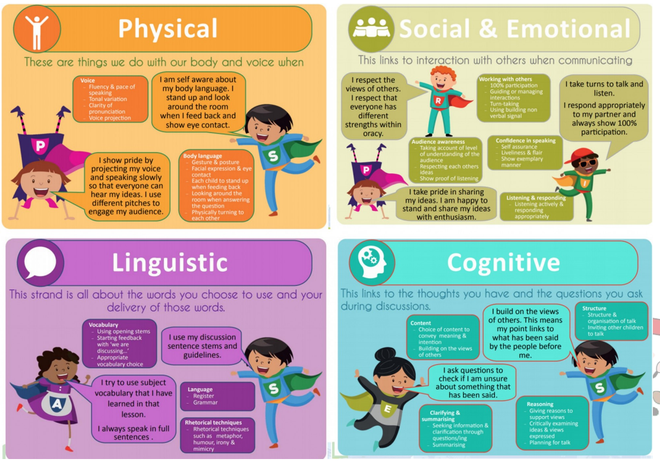 In class, we focus on one oracy objective/ skill each week (that relates to one of these four strands) and plan activities which allow these skills to be practised and developed.

Here are some examples of activities that are used to develop oracy in our school:

7 ways to promote oracy at home

Try these techniques to help your child become a more confident communicator, in school and at home.

1. Read aloud to your child

‘Reading aloud to your child, well beyond the age they can read for themselves, combines the benefits of talking, listening and storytelling within one activity that helps children build their vocabulary, learn to express their thoughts, and understand the structure of language,’ says Billie.

Many kids aspire to being vloggers or YouTube stars, so encourage them to start a video diary, either to chart their everyday life or to record special occasions like birthdays and holidays. For safety’s sake, keep these within the family rather than broadcasting them online.

Games like 20 Questions, Guess Who? and I Spy are great for helping children use descriptive language and think critically about what they’re saying.

4. Talk about their day

Ask your child, ‘What did you do today?’ and they’ll often claim they can’t remember, so find different ways to talk about what they’ve been up to. Eating your evening meal as a family is a good way to encourage conversation, while older kids are often more chatty in the car, where they feel less like they’re being interrogated. You could also try our tips for asking the right questions to elicit information.

5. Phone a friend (or relative)

Persuade your child to take a break from text and WhatsApp and develop their speaking skills by making an actual phone call. ‘Encouraging them to speak to different family members on the phone or on a video call will build confidence.'

This is a great pre-phonics activity for young children, who can be encouraged to listen carefully to the sounds they hear – from traffic to birdsong – and describe them. They can also describe the natural sights they see, such as trees, animals and birds and the sky.

Joining extra-curricular clubs is a good opportunity for your child to converse with different people outside the home or school environment. Many of them also involve taking instructions (such as being coached in sporting techniques or to complete science or art projects), and introduce them to different vocabulary relating to their new hobby.
Top

Unfortunately not the ones with chocolate chips.

Some cookies are necessary in order to make this website function correctly. These are set by default and whilst you can block or delete them by changing your browser settings, some functionality such as being able to log in to the website will not work if you do this. The necessary cookies set on this website are as follows:

Cookies that are not necessary to make the website work, but which enable additional functionality, can also be set. By default these cookies are disabled, but you can choose to enable them below: